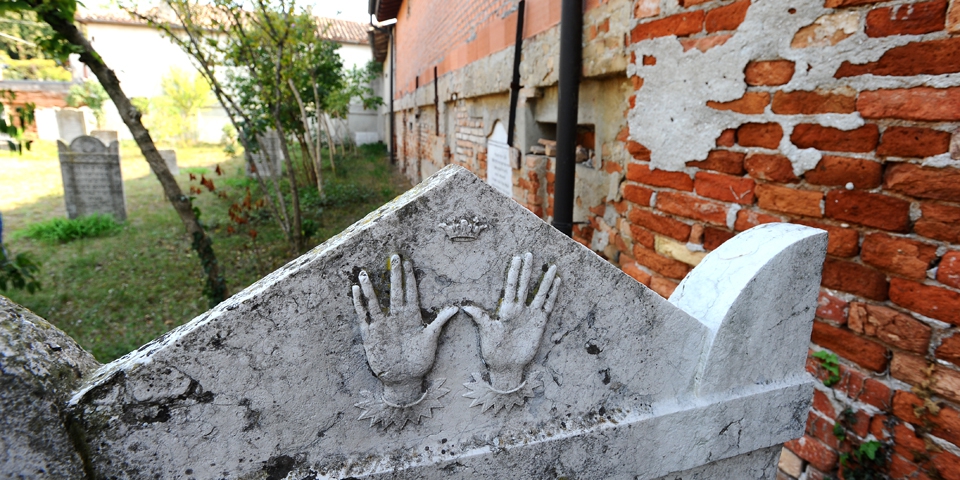 A route that joins two rivers: the Po and the Oglio, by car reaching Ostiano, Cremona, Pizzighettone, Crema, Lodi, and Melegnano. A weekend is the ideal time to visit, maybe quietly enjoying Crema and Cremona; or for those leaving from Milan, it can be done in a day, just visiting the monuments related to the Jewish culture. 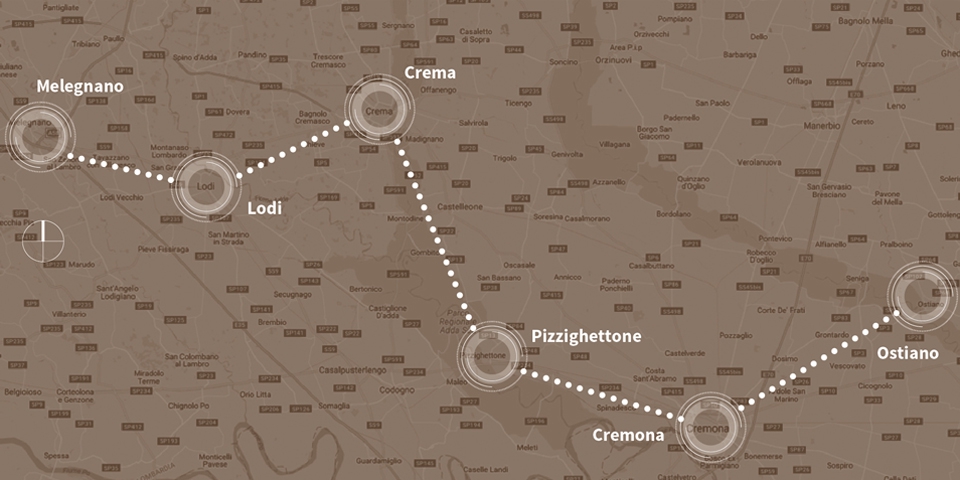 THE SYNAGOGUE IN THE FORTIFIED CASTLE OF OSTIANO

20 km from Cremona, at the confluence of the river Oglio with the river Mella, on a hill is the Castle of the Gonzaga (XV cent.). Once it was surrounded by walls and a moat with a drawbridge. A large Jewish group of a hundred people lived inside it, in the house of the Governor. The first ones came from Rome, then German Jews arrived. In 1630, a part of six hundred fugitives from Mantua stopped in Ostiano. They were on the run from the Lanzichenecchi, and they were welcomed in the principality of Bozzolo. The building was inhabited for two centuries, with subsequent modifications, interior embellishments with stuccos, links between the two levels, that became three with the construction of a synagogue in the right wing of the building. There is a large rectangular vaulted room, lit by three big windows. It was abandoned and fell into disrepair at the beginning of the twentieth century, when the Jews left the town. In 2006 the roof collapsed due to excessive snow. Since 2008 it belongs to the Municipality, with restoration in progress. Furnishings and furniture have been lost. With the coming of Napoleon, some well-off Jews moved to the big village, now via Garibaldi. There they bought important buildings, and they integrated perfectly with the local population. Israel Finzi, the last rabbi of the group, became mayor. In Località Montagnetta there is the second cemetery of the group, opened since 1800. The location of the older one is unknown. Not to be missed the Castle and the church of San Rocco.

JEWISH ATMOSPHERE AND MEMORIES IN THE MEDIEVAL CREMONA

Proloco - Piazza del Comune 5 - tel. 0372 406391 - Fax 0372 30027 - info.turismo@provincia.cremona.it - www.turismocremona.it . Cremona is 85 km from Milan, not far from the river Po. City of art, rich in monuments from the Middle Ages, known for its lute-makers. In the Town Hall square overlooking the Duomo, the Torrazzo, the Baptistry, the Loggia dei Militi, and the Town Hall. In the sixteenth century, a large and cultured Jewish group lived behind the square and the medieval streets, until the general expulsion of 1597. Next to moneylenders, many important Jewish groups of study developed to a high-level, with rabbis and scholars. The typography with typographer Vincenzo Conti reached high levels. The same famous Soncino worked in the city. Part of these works (saved from the tragic fire of the Talmud of 1559) are preserved in the State Archives of the city. A ghetto was possibly created in the area around via Ceresola, already Prato del Vescovo. The cemetery is between the Cremonella ditch and the city walls of the twelfth century. Jews  were already concentrated in via Verdi, originally Contrada degli Ebrei, then Strada Giudea and via Giudecca, where there was also the synagogue. They also lived in via Pertusio (already Contrada dell’ Argenta), in Porta Marzia and in via Mercatello. In the civic Museum of via Datiè is preserved a gravestone in Hebrew coming from the cemetery of Casalmaggiore and dedicated to twenty-eight years old Isaia Nathan Carmi, who died in Brescello in 1591. There is also a second smaller plaque. Today they are both not exhibited to the public.

PIZZIGHETTONE, NATURE AND HISTORY ON THE RIVER ADDA

Proloco - Via Porta Soccorso, 21 - tel. 0372 743900 - Fax 0372 1960355 - cell 327 7033051 prolocopizzighettone@gmail.com - www.prolocopizzighettone.it . Not far from Cremona, along the river Adda that bisects the old town centre: the main built-up area is on the east bank and the small village of Gera is on the west. A Jewish history is linked to the river, which at this point is easy to cross. Here the Calamano banker operated who, after the dramatic process of 1488 that involved many Jewish moneylenders were permitted by Lodovico il Moro to return to the city. Not to be missed Torre del Guado, walls and church of San Bassiano. In autumn it holds a noted gastronomic fair.

CREMA, AN INCREDIBLE TOWN OF ART WITH MEMORIES OF GERMAN JEWS

Proloco - Piazza Duomo, 22 - tel. 0373 81020 - Fax 0373 255728. Crema is 44 km from Milan on the river Serio. It’s a town rich in artistic monuments of great value. Famous for the production of musical instruments (organs), it has a history that intersects for nearly a century that of Ashkenazi moneylenders, from Germany. Witness of their stay is a sixteenth century plaque in Hebrew, today in the Civic Museum in via Dante, 49, already seat of the Augustinians monastery. Do not miss the Duomo, the Town Hall and the church of the Santissima Trinità. Factual note: Crema is now a Jewish surname.

TWO CENTURIES OF FRUITFUL LIVING TOGETHER IN BEAUTIFUL MEDIEVAL LODI

Lodi is 32 km from Milan, on the right of the river Adda. Behind the central ancient Duomo (XII-XIII cent.) a large group of Jews worked for two centuries as moneylenders, until the general expulsion of 1597. Some documents indicate their banks in vicolo San Vito (now via Giuseppe Verdi), in contrada Sant’ Agnese (now via Marsala) and the contrada San Cristoforo (now via Fanfulla). In contrada Sant'Egidio (now via Fissiraga) there was the synagogue and in vicolo Maggiore the Hebrew University. It was one of the largest groups near Milan, where they could remain for a maximum of three days. From Alexandria, they also did unusual trades for the Jews, like Pietro, son of Bongiovanni, city notary. There were some episodes of intolerance and the sad burning of the Talmud in the Piazza (1553 and 1593) with the destruction of hundreds of volumes. Perhaps there was a ghetto between via Legnano and via delle Orfanelle. The cemetery is along the eastern walls, now via Paolo Gorini. There remain four tombstones of 1552, 1554, 1575, 1583 now kept in the courtyard of the Library of via Tito Fanfulla 3, already seat of the former eighteenth-century convent of San Filippo. Not to be missed the well-preserved old town centre. In piazza della Vittoria is the medieval Duomo with, on the right, the unfinished belfry (1539-1559). Not far away the Incoronata church, a jewel of the Lombard Renaissance (1488-94). Factual note: Laudi is now a Jewish surname.

MELEGNANO AT THE ENTRANCE TO MILAN: MONEYLENDERS JEWS, COMMUTERS AGAINST THEIR WILL

Melegnano is 9 km from Milan. In 1400 the Jew Benedetto da Cremona held a loan bank. Milan forbade Jews to live in the city, but not to be in trade. Hence the widespread Jewish presence in the surrounding area. They remained there until the general expulsion of 1597. They didn’t have an easy life, so that the sovereign emitted an ordinance with the prohibition to offend them. Not to be missed the Visconti castle (1350), the church of San Rocco and, in piazza Risorgimento, Broletto and the church of San Giovanni Battista. 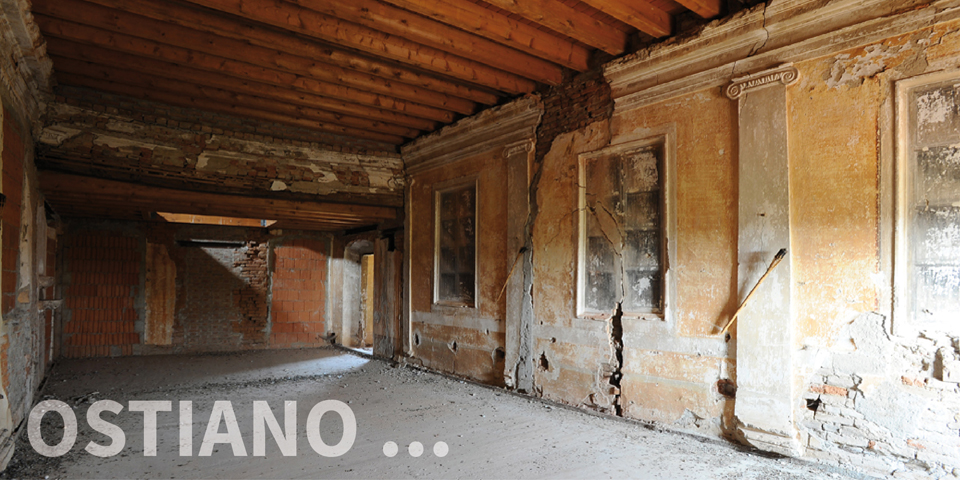 Ostiano, first floor of the area of the building where there was a synagogue in the palace © Alberto Jona Falco 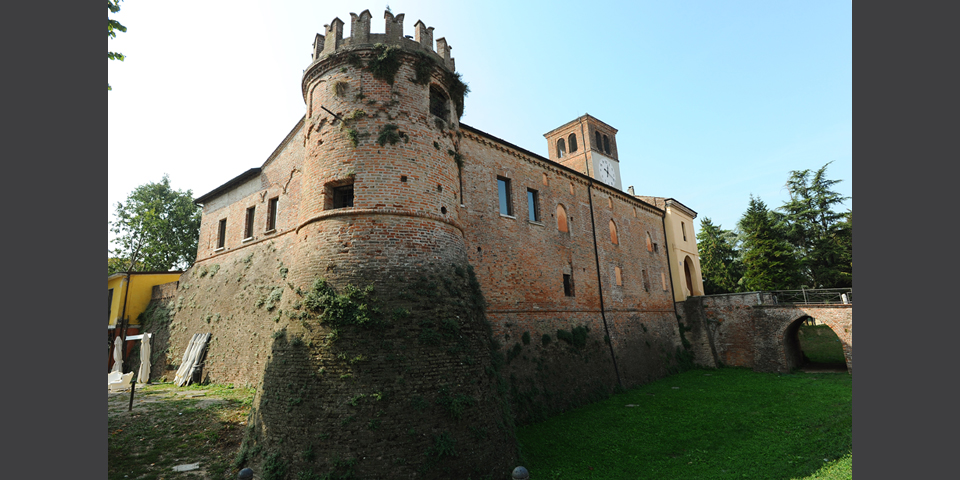 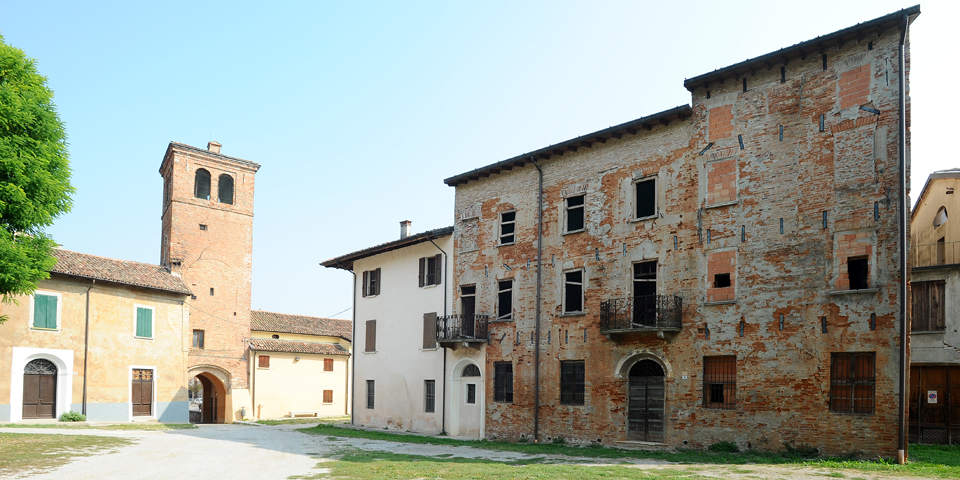 Ostiano, palace in which was the synagogue in the castle © Alberto Jona Falco 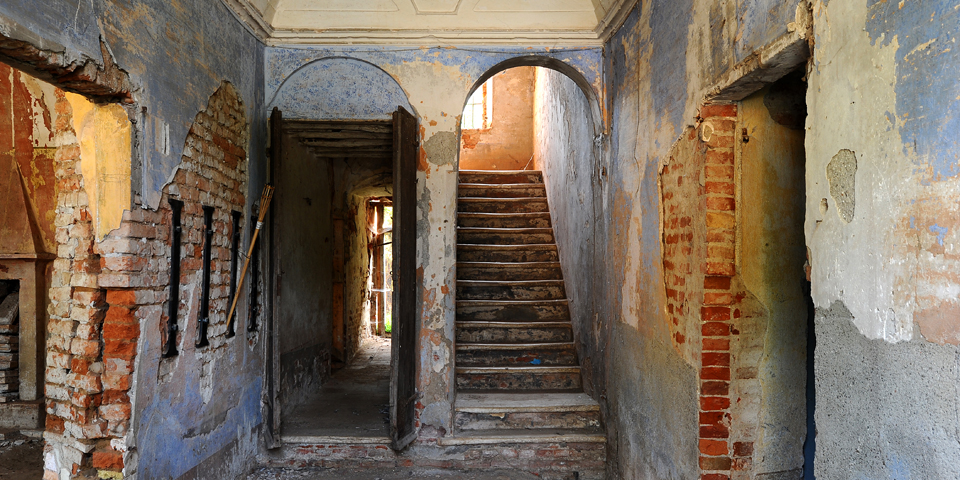 Ostiano, entrance of the palace where inside the castle was the synagogue © Alberto Jona Falco 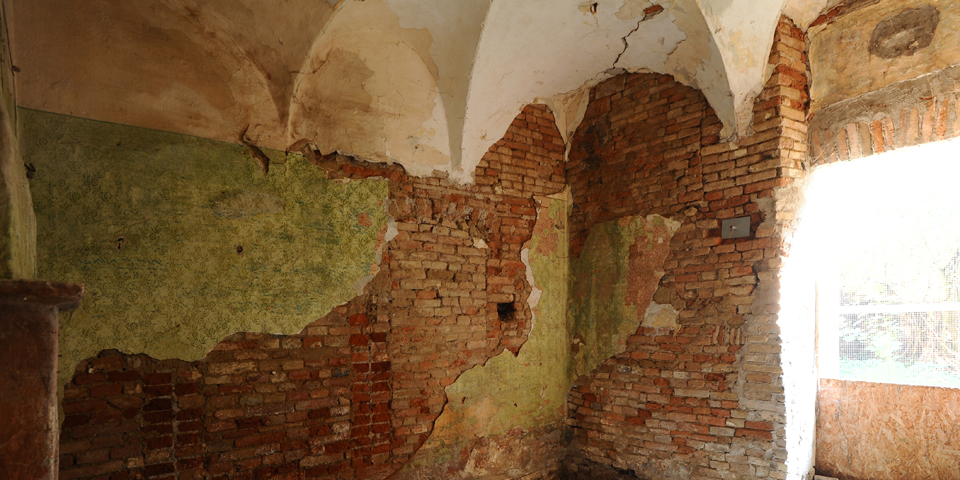 Ostiano, possible room for ritual bathroom on the groundfloor of the palace where there was a synagogue in the castle © Alberto Jona Falco 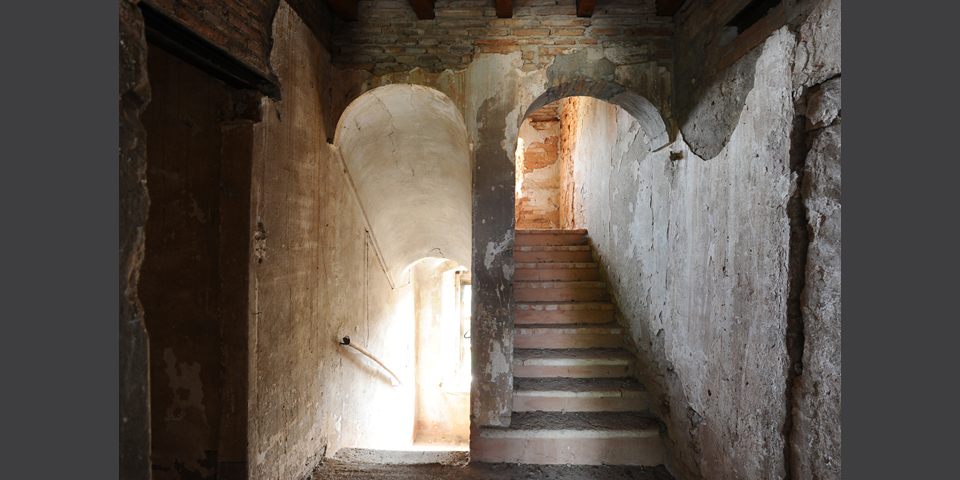 Ostiano, first floor, stairs of the palace where the synagogue was inside the castle © Alberto Jona Falco 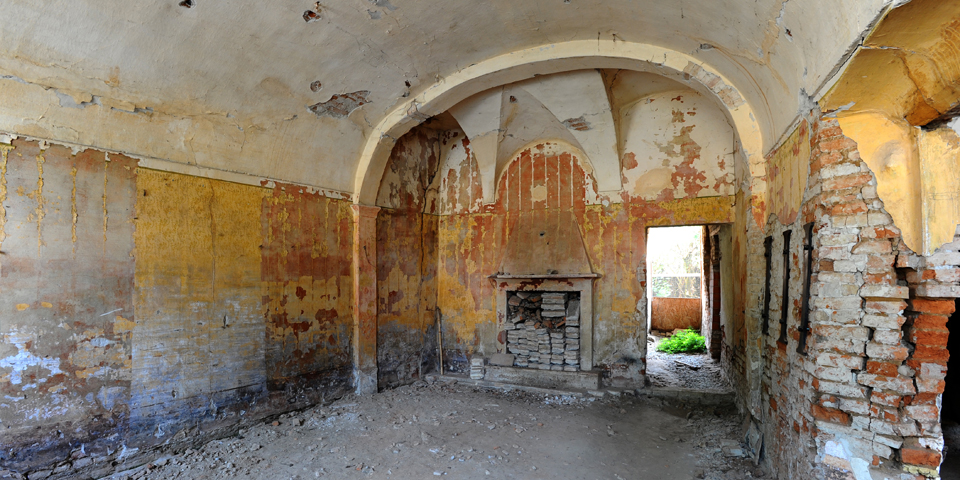 Ostiano, room at the groundfloor on the left of the palace where the synagogue was inside the castle © Alberto Jona Falco 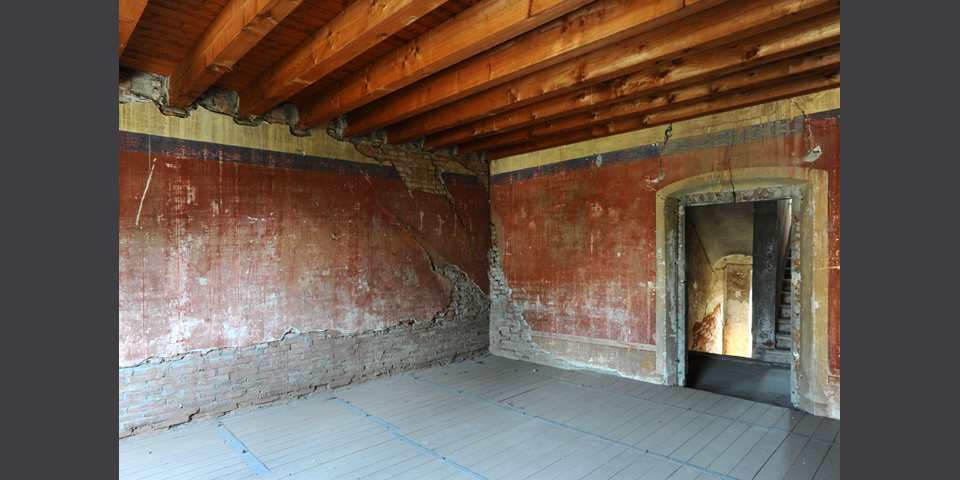 Ostiano, room at the first floor of the palace where there was the synagogue inside the castle © Alberto Jona Falco 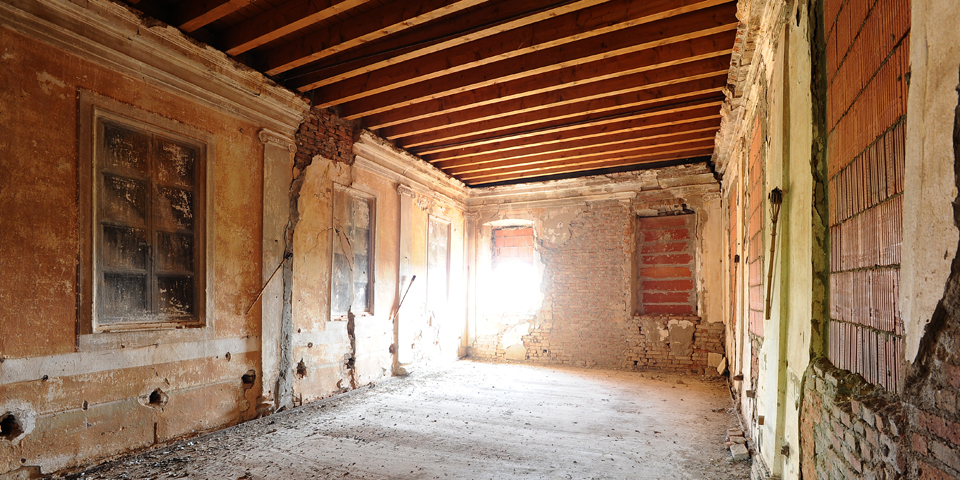 Ostiano, first room floor of the palace where the synagogue was inside the castle, view from under the women's gallery © Alberto Jona Falco 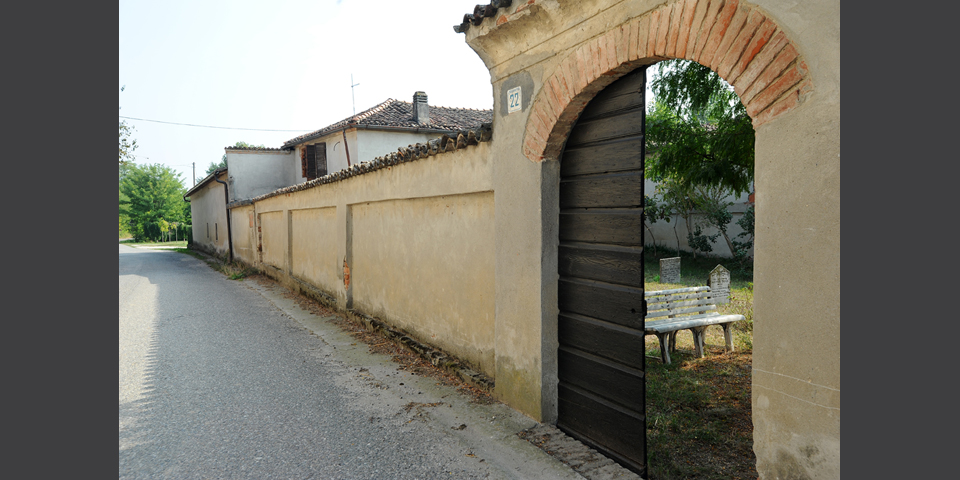 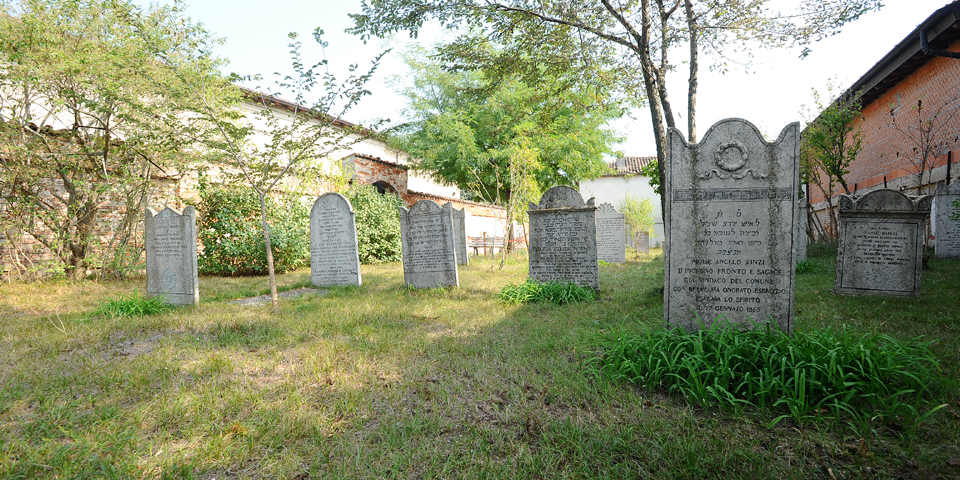 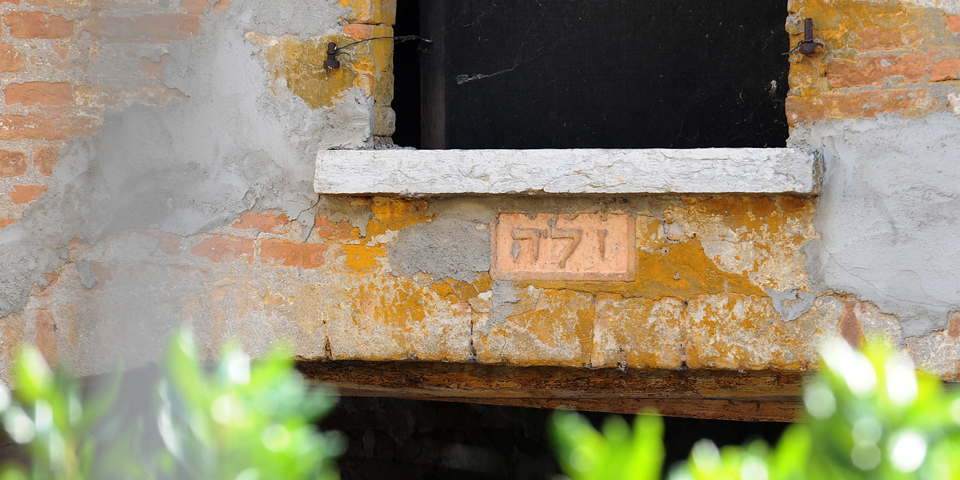 Ostiano, detail of the writing found in a courtyard in the back of the florist © Alberto Jona Falco 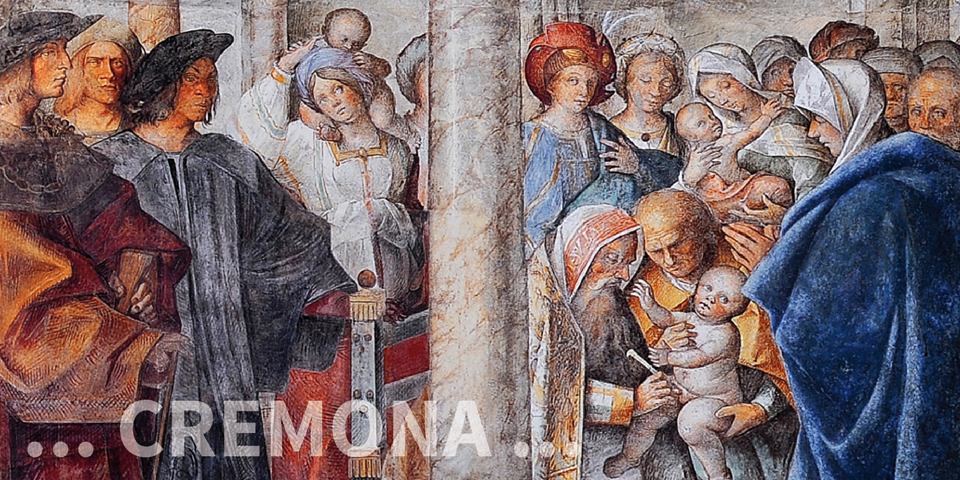 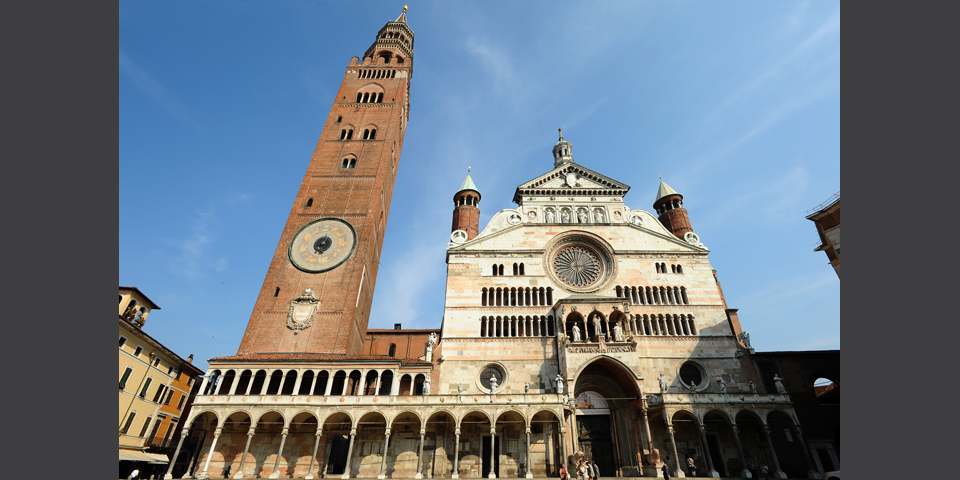 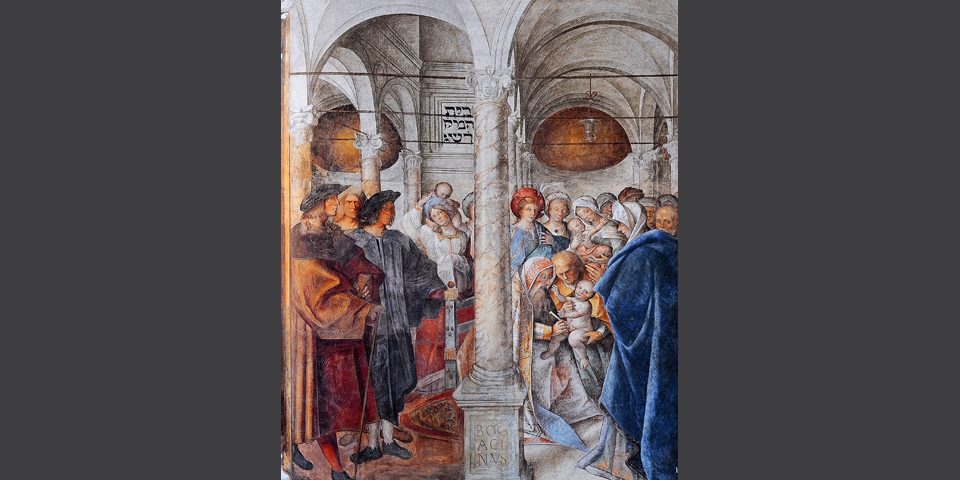 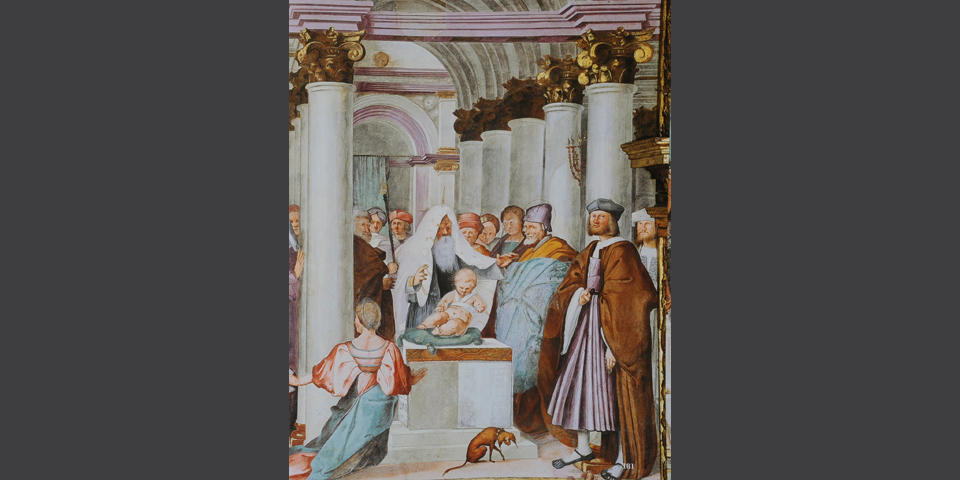 Cremona, fresco in the Cathedral with circumcision © Alberto Jona Falco 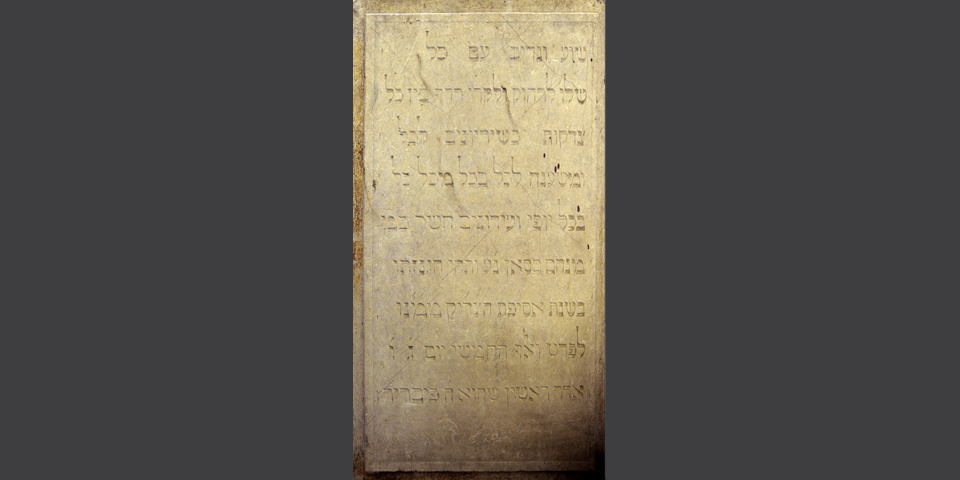 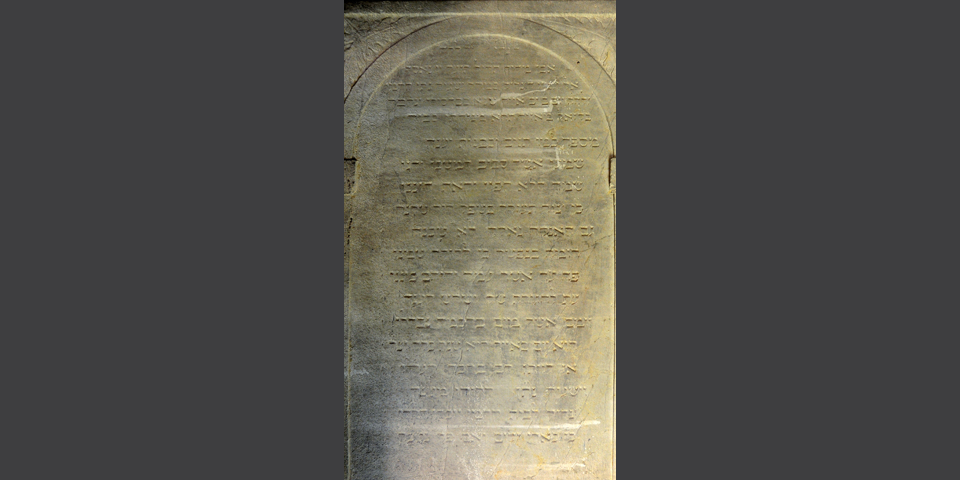 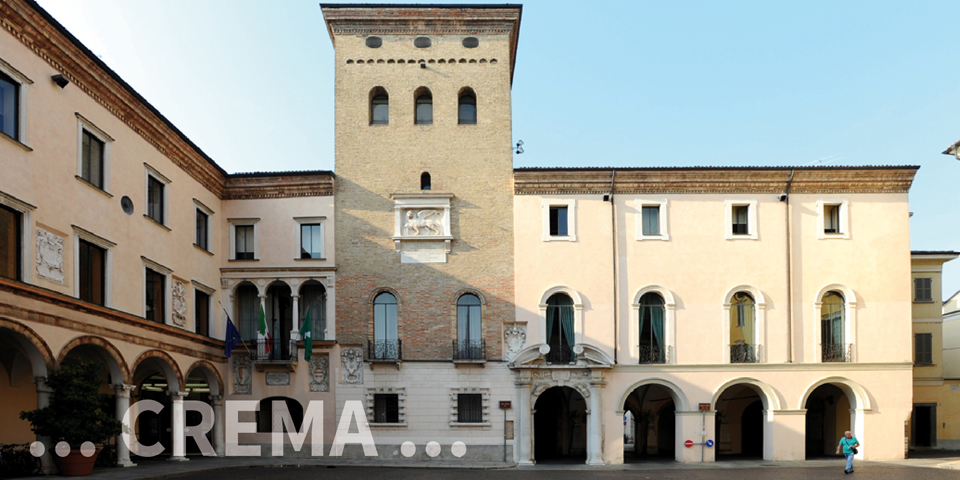 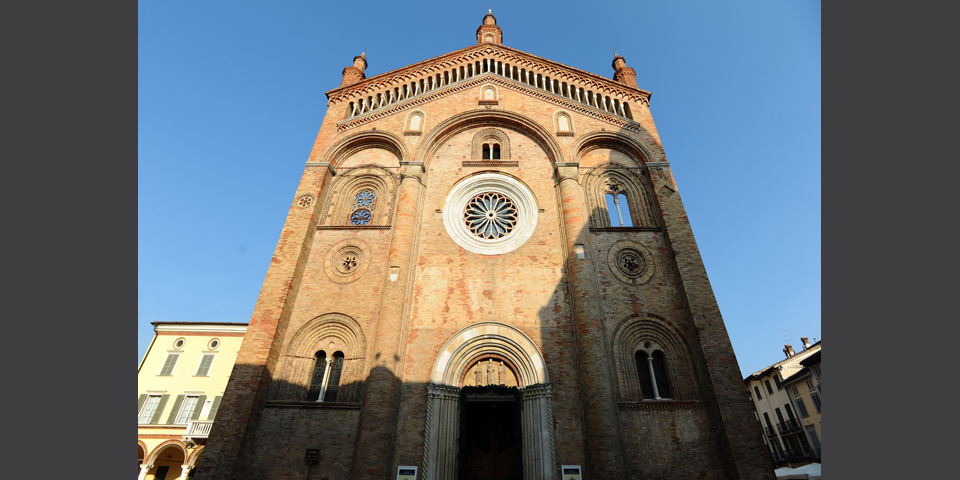 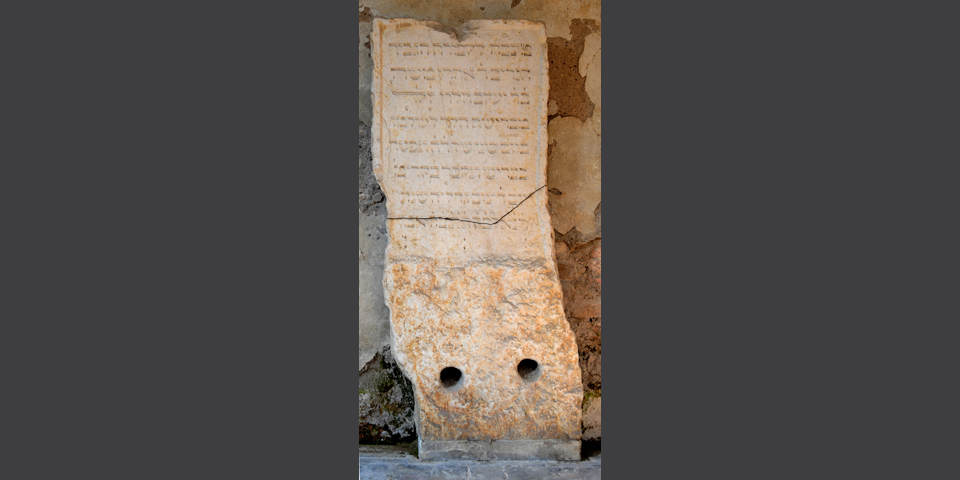 Crema, plaque of the sixteenth century at the Civic Museum © Alberto Jona Falco 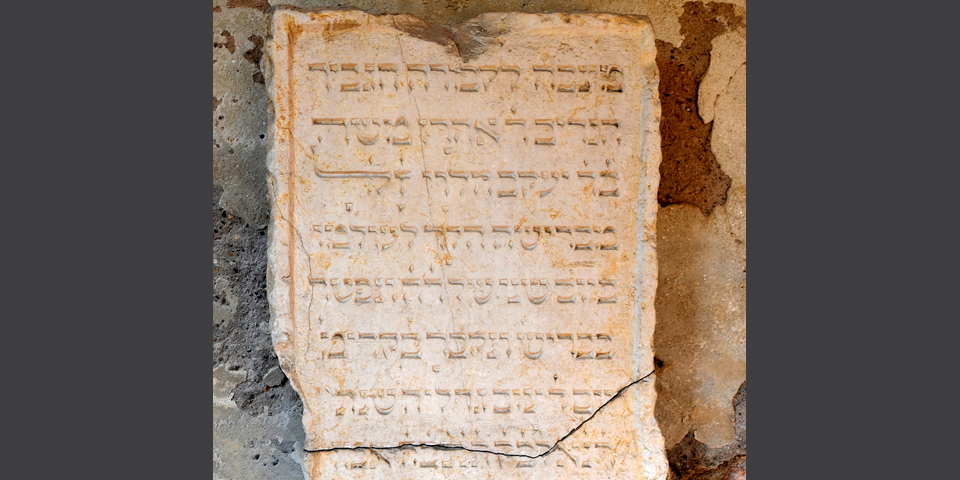 Crema, Crema, detail of the plaque of the sixteenth century at the Civic Museum © Alberto Jona Falco 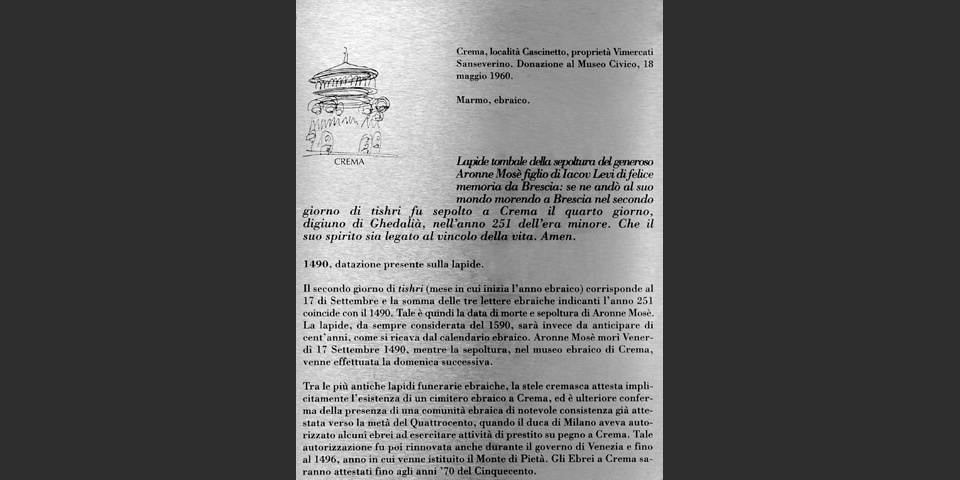 Crema, translation of the plaque of the sixteenth century at the Civic Museum © Alberto Jona Falco 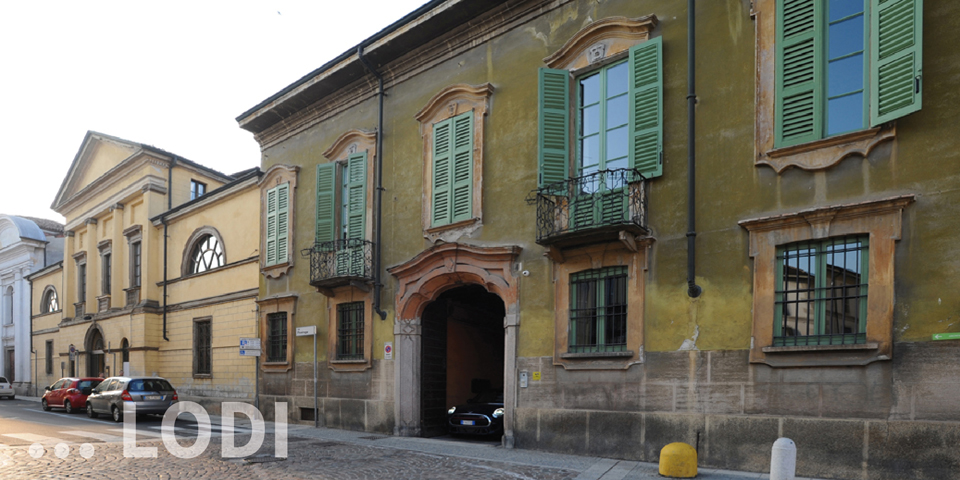 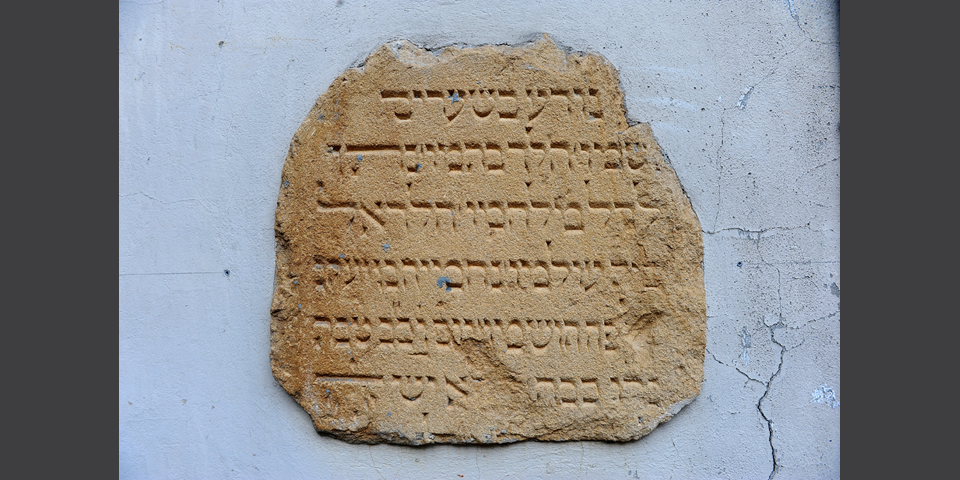 Lodi, plaque with Hebrew inscriptions in the courtyard of the university library 1 © Alberto Jona Falco 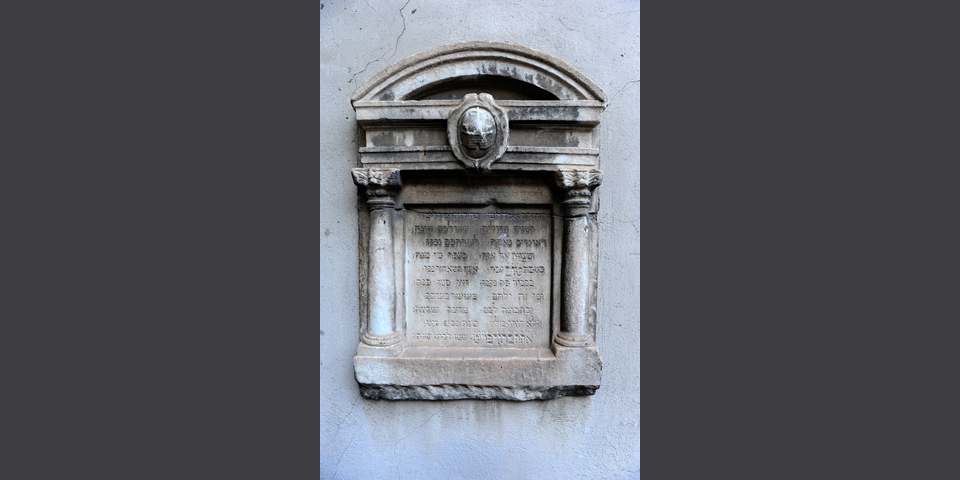 Lodi, plaque with Hebrew inscriptions in the courtyard of the university library 2 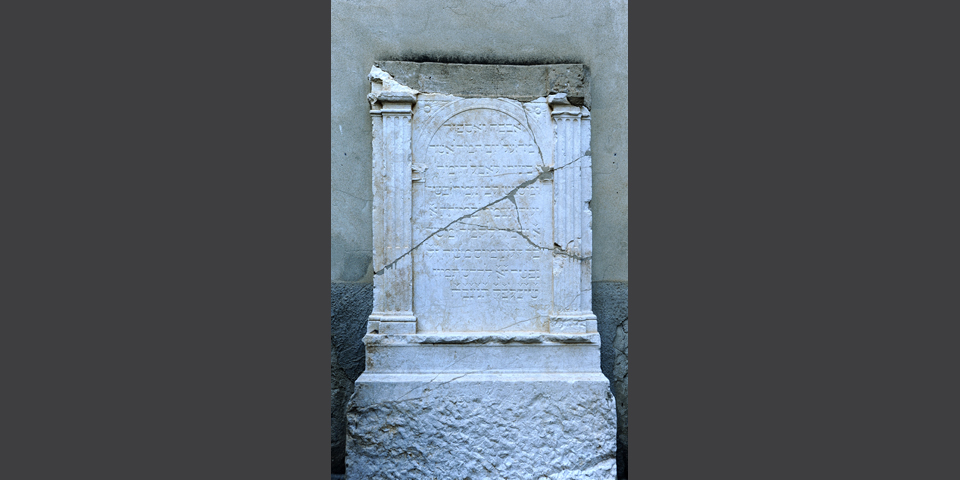 Lodi, plaque with Hebrew inscriptions in the courtyard of the university library 3 © Alberto Jona Falco 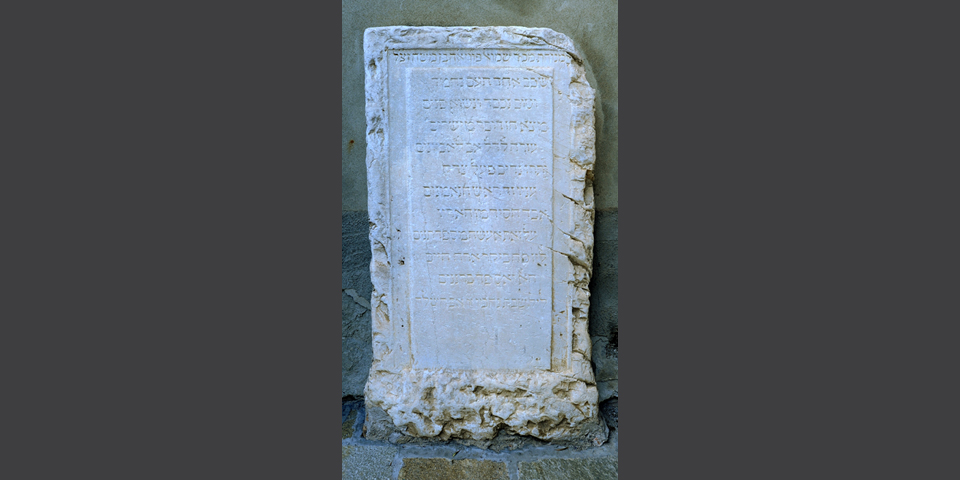 Lodi, plaque with Hebrew inscriptions in the courtyard of the university library 4 © Alberto Jona Falco