A strong Jewish past 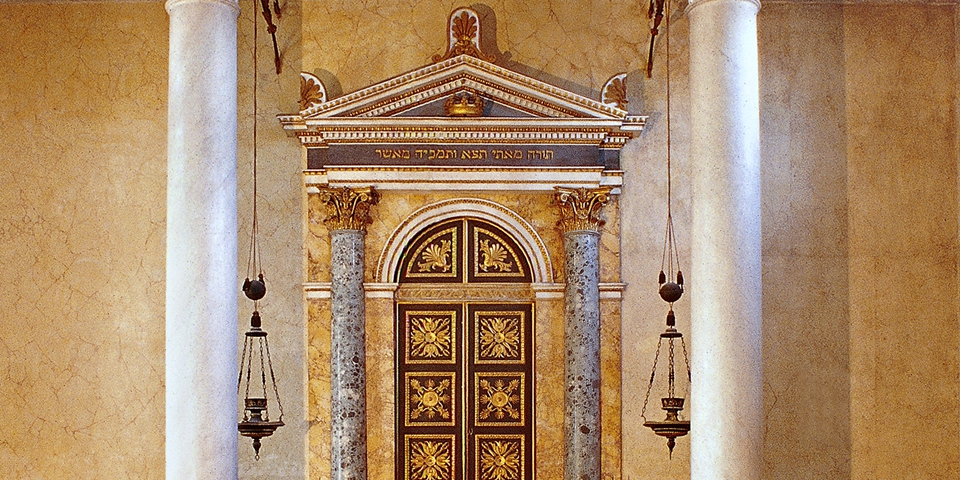 33 kilometers from Mantua, Sabbioneta is “the Gonzaga’s little Athens”. In the town, Prince Vespasiano’s court (1531-1591), lived Jewish money-lenders and printers. Tobia Foà and Salomone Forti used to work in Via della Stamperia (formerly Via Fabio Filzi). A lively and flourishing town under Vespasiano Gonzaga, it underwent a period of decadence after his death. At that time the group of Jews residing in Sabbioneta split: some left, some others stayed. The Jews who remained independent from Mantua, their mother-community, expanded the synagogue, keeping the cemetery. 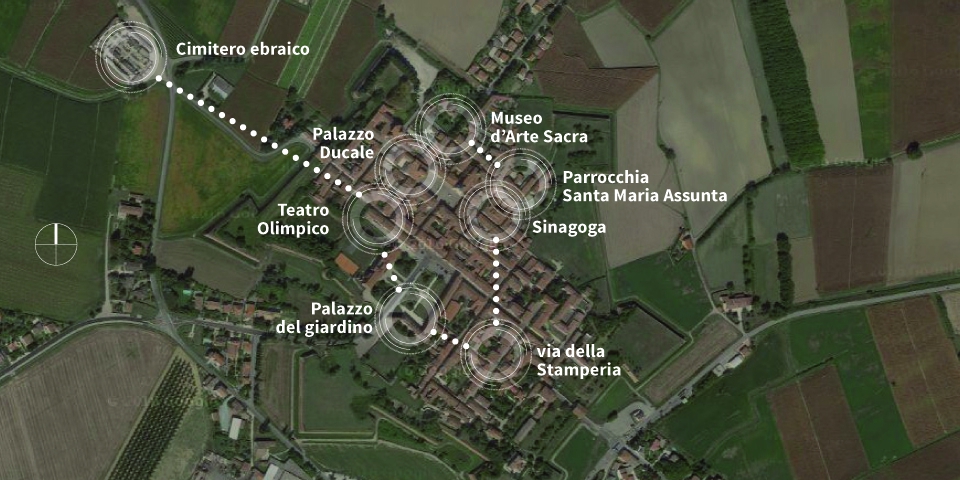 WANDERING IN THE GHETTO STREETS AND IN THE SPACIOUS SYNAGOGUE

The Jews used to live between Piazza San Rocco, Via Campi and Via Pio Foà. The first 17th century synagogue with the entrance in Via Campi was expanded and restored in 1824 by architect Carlo Visioli (the same who designed Viadana synagogue). The prayer hall on the third floor is rectangular. On the entrance door you can see the date, 5584 (1823-1824) and the Jewish inscription “I will dwell on your humerus”. Aròn and tevà (cupboard and pulpit) lies on the eastern wall, in front of the entrance. The brick aròn is shaped as a temple: a fronton, decorated with a crown and the Jewish inscription “The law will surely come from me, and who upholds it will be lucky” with two fake marble columns with Corinthian capitals. It has two wooden doors, divided into six tiles with two lunettes above, decorated in green and gold. It stands in a raised position. At its feet is the tevà and in front a wrought iron gate. On the side, two lamps, the only piece of furniture remaining of the old synagogue. The vault is decorated with plaster, divided into frames. The women’s gallery, supported by columns, faces the hall, closed by wooden grilles. The hall, restored by Brescia Monuments and Fine Arts Department in 1994, is included in the city tour. It was damaged during the earthquake in 2012. While some buildings were being restored, three mezuzòth were found on the doorpost. They are three blue glass vials with a small parchment roll inside, on which a prayer is written; today they are held in the Sacred Art Musem, number 6 via Pesenti. Outside Porta Imperiale there’s the 19th century Jewish cemetery.

NOT TO BE MISSED: PALAZZO DUCALE, SANTA MARIA ASSUNTA AND OLYMPIC THEATRE

It’s a Renaissance town closed by hexagonal walls, with two entrance doors. We recommend visiting the Palazzo Ducale, with porticoed ground floor, marble windows on the first floor and a small tower. Inside, a rich hall with a wooden ceiling, statues and paintings. In the square, you can find the church of Santa Maria Assunta in white and pink marble, a high bell tower and the church of the Incoronata. Under the portico, a gravestone commemorates Leone Donato Forti, the Jew who gave the church back to the religious authorities in 1826 “for the country’s sake”, after it had been deconsecrated in 1810 by Napoleon’s troops. Inside the mausoleum there are the Duke’s remains. We recommend visiting the Olympic Theatre, with a rectangular plan with steps, galleries and frescoed walls. Piazza Castello, formerly Piazza d’Armi, is surrounded by a long portico with the Galleria degli Antichi, and it is connected to the Garden Palace or Casino, built as a place for the Prince’s pleasure. Inside there are sumptuous halls. 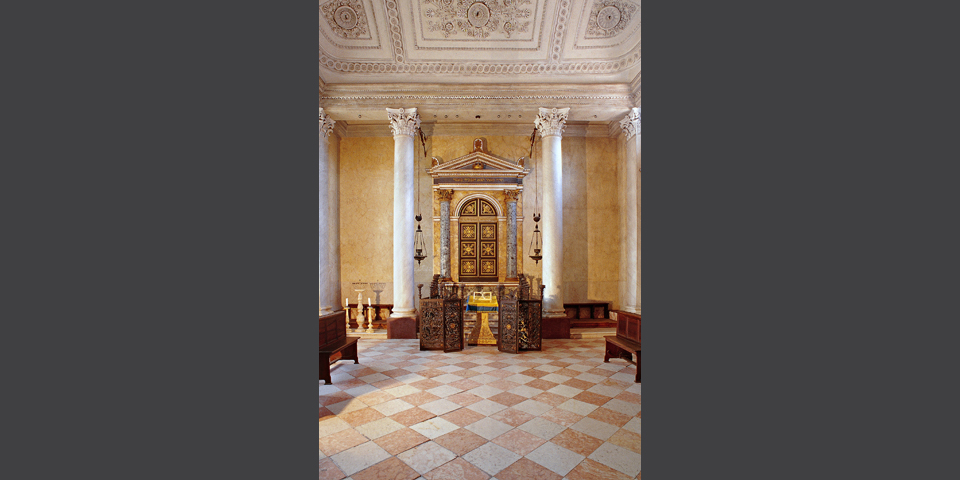 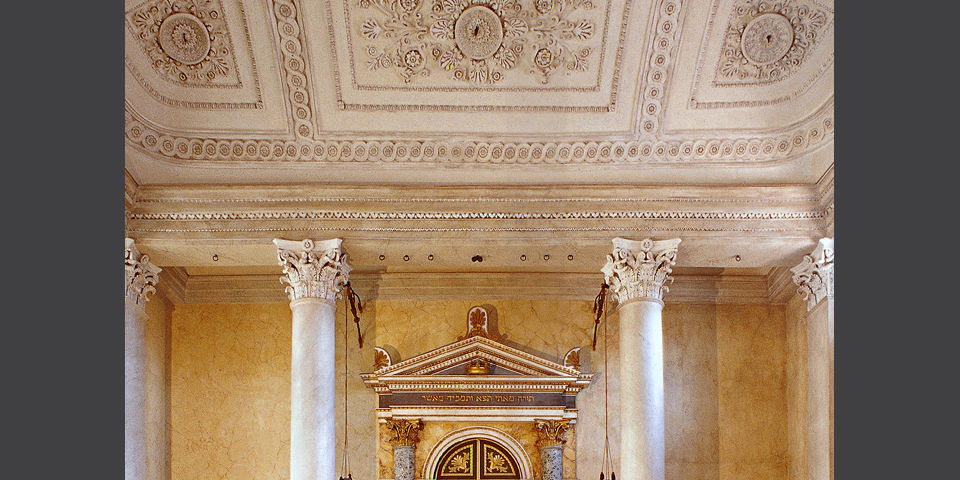 Sabbioneta, synagogue: detail of the ceiling and the upper frieze of the Holy Cupboard © Alberto Jona Falco 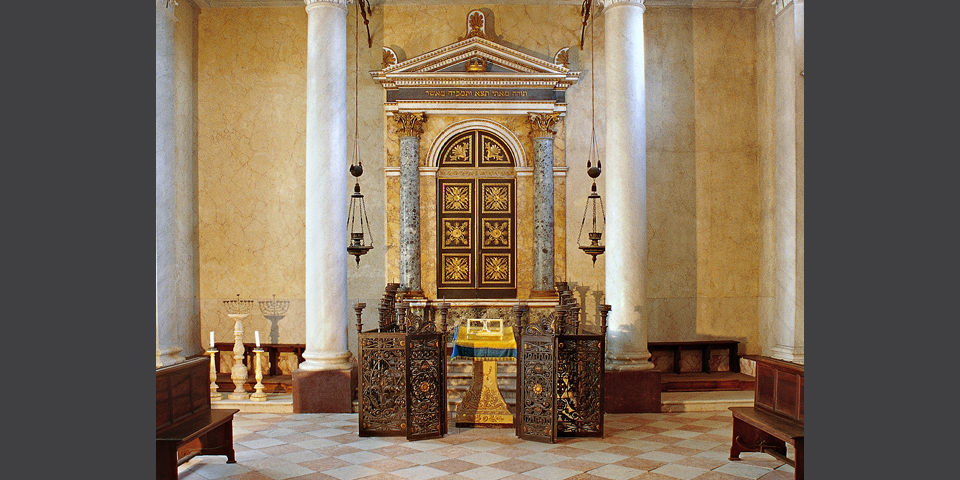 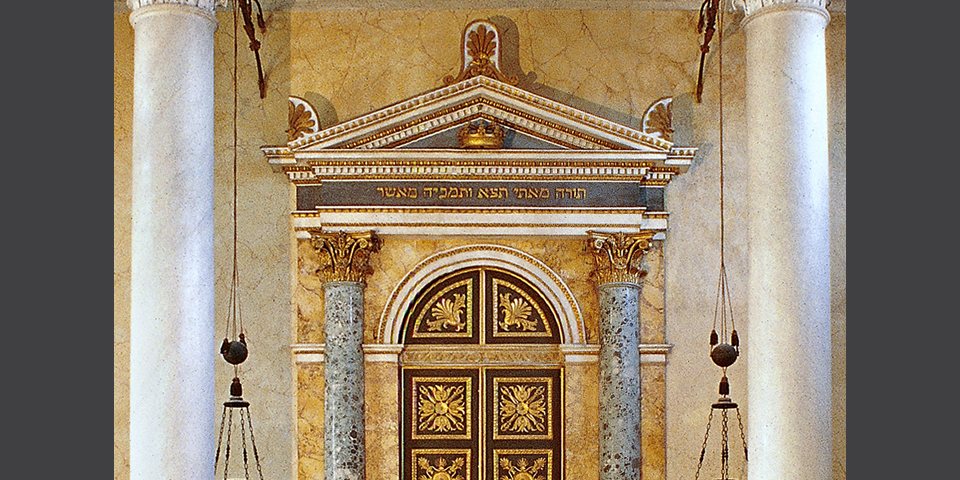